3089 has been updated! Lots of the building textures have been improved & new ones have been added.

In celebration, Phr00t’s Software is hosting another free key giveaway for both games! You can enter on Facebook here:

Keep an eye out on the Facebook page for announced winners!

Let me know if anything broke!
– Phr00t

Our artist, Swawa3D, improved nearly all of the robotic textures, tweaked some models & helped implement a cool new visual feature where details will glow in the dark (like robot eyes). We are planning on tweaking some of the building textures next.

Want to take over a blue base? Now you can! After clearing out a section of a blue base, you can use a conversion tool to permanently convert that section to a friendly red base — you’ll be rewarded with skill points too, depending on the difficulty of the area. Pick up the tools at a Quest station.

Meteor charges are here! Meteor strikes will occasionally drop explosive items, but get them quick before they disappear!

There are lots of other improvements & fixes, listed here:

This is likely the last major update since 3089 is nearly complete & will soon be entering a maintenance phase consisting of primarily bug fixes and balancing tweaks as needed. However, some texture tweaks are still coming & I’d like to implement a snap-to-grid building option.

Let me know if anything broke & as always, back to work!
– Phr00t

3089 should be on Steam this Friday, January 10th! Steam clients should pick up on the release status & begin downloading the game if you’ve already redeemed your Steam key. Talking about Steam keys, all should have been distributed to Desura, GamersGate, IndieGameStand, IndieRoyale & BMT Micro owners. If you didn’t get an e-mail and you are a BMT Micro owner, let me know!

3089 was also updated to v1.0.10! This should hopefully be the version released to Steam. I made some physics to physics placement tests & made the artificially intelligent robots hop off cliffs if their target is near the bottom.

OK, getting ready for the release and let me know ASAP if you experience any issues! Back to work,

Important polishing update in preparation for Steam — hopefully boxes won’t do this anymore:

For some reason, the physics library I am using (bullet) doesn’t like box objects rolling on large terrain. So, I modeled boxes after spheres — you’ll notice them roll a little easier, but overall they will still behave like boxes.

Also, I redesigned how quest targets spawn. They should all spawn much closer to the initial “?” and not jump around randomly anymore. This also greatly helps multiplayer co-op, since tasks will be right next to each other — allowing you to work with your teammate much more closely!

3089 should be ready on Steam in approximately a week, if all goes well!

Thanks to feedback from the artist @ http://www.swawa3d.com/, 3089 got some usability improvements. Take a look at how the item descriptions look now:

Things are much better organized & aligned, making it much easier to read. A “damage per second” value has been added to weapons, which should make comparisons easier. Finally, the box will follow the mouse cursor, and not always be centered on the screen.

I’ve also “capped” the size of the user interface, so players with high resolution displays won’t see the interface stretched across the screen.

The other change you may notice is an option for “Jump Control” in the input configuration section. This will allow you to hold down the jump key to control the height of your jump. This option defaults to “off”, which was the behavior before this update. Read about the rest of the updates here: https://3089game.wordpress.com/version-history/

Preparing for an early January release on Steam! I’m also gathering Steam keys to send to current owners, just as I did with 3079.

3089 is no longer considered “Beta” software! That doesn’t mean development is ending or even slowing down — it just means 3089 has had all of its major planned features implemented (like multiplayer, combat, story, weather etc.) & the action runs smooth and with no known major or moderate bugs. However, I’m sure with your feedback, plenty of updates to this great game are still to come.

The underwater environment has changed quite a bit. First, visibility has been significantly reduced for both the player and other robots. This will make swimming underwater a more steathly form of transport & not so deadly. Projectiles will also be limited in length to about the length robots can see. Air spawns have also been removed underwater, so you should no longer see ships floating back to the surface. 🙂

Ramps have been added to base entrances, so it will be much easier to get in & out of bases. I watched too many players accidentally fall off a base edge & struggle to get back!

The other big change is how meteor damage is handled — if you have a roof over your head, you need to be closer to a meteor strike to be killed. This way, standing near windows will no longer be so dangerous, although I still don’t recommend it!

There are lots of other changes in this update, so please read over the version history here: https://3089game.wordpress.com/version-history/

What’s next? I want to make sure 3089 is stable for the big upcoming Steam release planned for early January! After that, I want to improve building mechanics, add some new quest task types & we’ll see what else 🙂

3089 takes a huge step towards a stable release in this update! Graphics got a huge boost by adding some new effects & fixing many long-standing glitches. The multiplayer “super-robot merge” mode is now implemented: join up with your co-op buddy to fight together! Also, the spawn location system was completely overhauled so things will be placed where you expect them & far less (hopefully zero) things being placed in bad places (like robots in rocks).

First, lets quickly go over the graphical updates. A new “toon” effect was added (which can be turned off) while really accentuates & improves the polygonal look. Now things look much closer to what I envisioned them to look like. Screenshots don’t really do it justice — you really have to play it to experience it. Lots of graphical glitches have also been fixed, like shadows not appearing through water & rain not being rendered in front of clouds. A new tree top model was created, which actually uses fewer polygons, but looks more natural. The following screenshot shows the new “toon” effect:

Multiplayer “merge” mode is finally in. One player requests to be the gunner, while the other requests to be the driver. The gunner can’t move, but can use any offensive weapons. The driver does the moving & can use a grappling hook. Both players combine “Guns” and “Defense” skills & the gunner’s accuracy isn’t penalized by movement. You won’t be able to fly ships or use stealth while merged, though.

Spawn points have greatly been improved. I used a special debugging mode to visualize where everything is being placed & I noticed too many spawn points were being placed in rocks, underground or in other bad places. So, I threw out most of the old code that determined where things went & replaced it with a much cleaner version. Now, more spawn points are where you expect them, and hopefully there will be no more instances of robots in trees, rocks or underground! This also has many great side-effects, like “Time Ripping” items & quest targets being spawned in places you can actually get to. Trees & rocks should overlap much less (again, hopefully never) with buildings, too.

There are lots of other important improvements in this update, so head over to the version history to read the rest: https://3089game.wordpress.com/version-history/

What is next? Well, I need to make a new trailer with the new visuals! Game wise, I want to make building things easier (by adding some type of snap-to-grid system, maybe?) & hopefully get to some other suggestions made in the forums! Someone suggested “turret hacking”, like is Deus Ex, which sounds very cool! 😉

I’ve been pretty busy with getting 3079 on Steam, but I have been getting back to 3089 & it is time for an update! This is mostly a handful of visual updates in response to some feedback. You shouldn’t feel so small in this update! 🙂 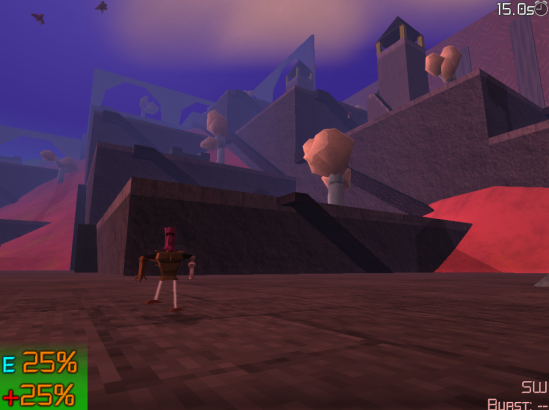 Spawns have been improved — I noticed a bug that was severely limiting places robots could spawn on the ground, which has been fixed. You also shouldn’t see turrets & boxes trying to occupy the same space.

Head on over to the version history to see all the changes!

I have been getting good feedback in the forums — I apologize if I haven’t been responding as quickly as I have before, lots on my plate! Hope to have another 3089 update sometime next week (Thanksgiving break time!).

Lots of quick updates coming in! I’m working on improving the game for new players — I agree that 3089 has a tough learning curve and the game is a bit difficult, so I’m taking steps to resolve that. Now, players can start with pre-defined skill point assignments for common playstyles, like gunners & ninjas. This will allow players to get right into the action without having to worry about which skills should go where — if you want to shoot guns, pick the “Gunner” class, for example. Of course, you can still choose the “Custom” option to start with 12 available skill points (up from 10). I’ve also reorganized the “Quick Tips” section and stressed how important it is to just spend a few seconds reading these points over — we need to make sure players know red guys are friendly and there is a “Run” key! 🙂 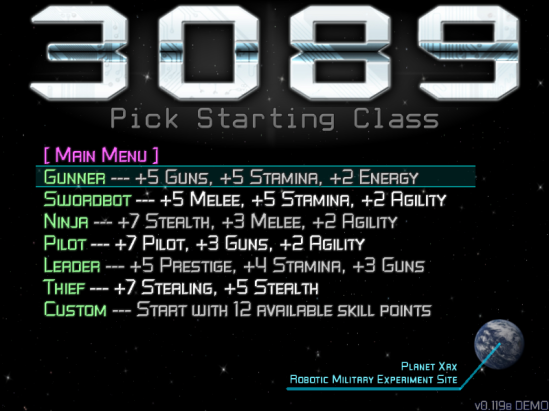 I’ve also fixed a few bugs, like the automatic BMT Micro updating buttons not working correctly. Check out all the changes on the version history!